THANK YOU TED CRUZ FOR SPEAKING FOR AMERICANS AGAINST OBAMACARE FUNDING! 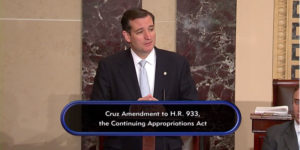 Millions of Americans want to thank you Ted Cruz, Mike Lee, Marco Rubio, Rand Paul and other supporters for speaking for 21+ hours on the Senate Floor on behalf of defunding ObamaCare! Your marathon speech created a lot of good according to many opinions, and you did this in the face of much vocal displeasure by some of your Republican colleagues and especially across the aisle with all of the Democrats.

The reason so many disliked your position is that they will have to answer to their voting constituents on their positions on ObamaCare. This Affordable Care Act Bill, which is in fact is grossly unaffordable, is an albatross hung on the necks of American citizens and businesses. For years the Democrats have promoted a government controlled health care system that would totally control all citizens both with healthcare and their financial lives. They now have legislation in place to do this…and are tightening the noose to get it implemented. Many Americans have no idea what is happening to them.

For this reason I for one am very pleased to see that true American Patriots have expressed the dissatisfaction of the American Public where 60-70% of the population do not want ObamaCare. Today’s post is dedicated to conservative Senators for speaking up for Americans…

Thank You Ted Cruz For Speaking For Americans Against ObamaCare Funding!

Many campaign promises by President Obama were made about ObamaCare which have turned out to be totally untrue. Not only were the American People misled but now the President, Harry Reid and Nancy Pelosi refuse to stop and acknowledge the trainwreck which is happening, however have granted more than 1400 waivers to companies and organizations to be exempt from the Bill.  Here are a few examples of total untruths presented by President and the Democratic Party…

Obamacare Will Increase Health Spending By $7,450 For A Typical Family of Four

It was one of candidate Obama’s most vivid and concrete campaign promises. Forget about high minded (some might say high sounding) but gauzy promises of hope and change. This candidate solemnly pledged on June 5, 2008: “In an Obama administration, we’ll lower premiums by up to $2,500 for a typical family per year….. We’ll do it by the end of my first term as President of the United States.”  Unfortunately, the experts working for Medicare’s actuary have (yet again[1]) reported that in its first 10 years, Obamacare will boost health spending by “roughly $621 billion” above the amounts Americans would have spent without this misguided law. 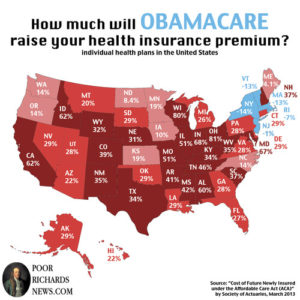 The Explosion in Healthcare Premiums in One Convenient Chart

Those nerds at the Society of Actuaries have crunched the numbers and gave us a tidy little forecast of insurance premium rate hikes under Obamacare. Oh, by the way, taxpayer subsidies don’t eliminate costs. A “free” elementary economics lesson out there for anyone confused about TANSTAAFL    (There ain’t no such thing as a free lunch).

The President intervenes to give Members and staff a break.

To adapt H.L. Mencken, nobody ever went broke underestimating the cynicism and self-dealing of the American political class. Witness their ad-libbed decision, at the 11th hour and on the basis of no legal authority, to create a special exemption for themselves from the ObamaCare health coverage that everybody else is mandated to buy.

The Affordable Care Act requires Members of Congress and their staffs to participate in its insurance exchanges, in order to gain first-hand experience with what they’re about to impose on their constituents. Harry Truman enrolled as the first Medicare beneficiary in 1965, and why shouldn’t the Members live under the same laws they pass for the rest of the country?

Millions of Americans and Businesses are being adversely affected by the Affordable Care Act Legislation.  It is inconceivable that so many politicians are choosing to ignore the requests of the American People to stop the implementation of the Bill at this time. But this has been their plan all along and Mr. O says hell nor high water is not going to stop them. To quote the usually articulate President this week….”It is not about you…they are messing with me”. Let’s recognize the rights of the people to disagree and act as a leader sir…citizens don’t like your policy…you have lived on being liked for far too long.

Certainly politicians now turning a deaf ear to the public will at some time soon have to face them and answer as to why they chose not to speak up with any objections other than…”this was voted in by the Congress, the Senate, the President and the Supreme Court and no matter how bad it is or how much damage it will do…we will keep this Bill in place”. This answer truthfully translates into…(“we slammed this health care bill down Republican throats because we owned the House, the Senate, the Presidency,  and the lame stream biased Media…and it really didn’t matter what the American people thought about it…they are not smart enough to understand it anyway-we want a federal health care program”).

The Bill was rushed through passage without reading it in the middle of the night by Democrats only, with Nancy Pelosi saying “we have to pass this 2700 page bill to find out what is in it”. The 2700 pages have now been interpreted into 20,000 pages of HHS regulations, most of which are very destructive to people, businesses and the economy of this country. I repeat, more than 1400 waivers have been given by the President to exempt thousands of people and organizations, especially Congress, from the Bill.  This is the height of hipocrosy. The implementation is not on schedule and some factions have received waivers like business which has been granted a one year delay…whereas such a delay has been denied for the public.

In my humble opinion the idiom “pig In a poke” truly applies to the Affordable Health Care Act. Others say it was passed  by “bait and switch” or “sleight of hand”. It will be up to the American voting public to decide if they will consider this to be true and to accept what is being thrust upon them.

Concerned About the Welfare of Our People and Our Country

So Will You Ever Be Ready To Become Rich?

So What IS Kangen Ukon™?